How to Calculate Standard Deviation and Variance and Formula?

Let make it a little simple for you. Standard deviation is the measurement of how spread out the numbers is, and the symbol is σ. The formula is quite simple to remember- you have to square root the variance to get the standard deviation. But, the question is, “What is variance?” 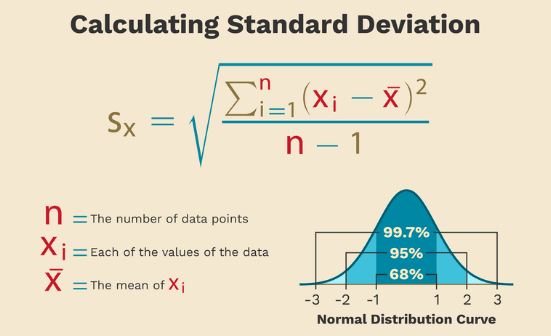 Variance is the average of the squared differences obtained from the mean. How can you calculate Variance? Given below are a few steps which will make it easy for you:

1.You and your friends have measured the height of different bottles (in millimetres):

Now what you have to do is first find the mean, then the Variance and lastly, Standard deviation. To find Mean:

You can use a calculator to find the square root of the above-mentioned value as it is easy and a few exams even allow the use of a calculator.

When you use standard deviation, you have to keep the following points in mind:

The variance for a discrete variable is made up of n observations and is defined as follows:

The formulas for variance and standard deviation can change if you frame the observations in a frequency table. After this, the squared deviations are supposed to be multiplied by each frequency value, and then the result is calculated from the total of these observations.

The variance in the frequency table can be defined as follows:

The standard deviation for a discrete variable is defined as

It will be helpful if the measure has the following properties:

What is the Standard Error?

While you are conducting research, It will not be possible for you to collect data from the entire population. This is why you will collect data only of a small sample of the entire population, and because of this, you might end up with slightly different values and means each time. But, when you take enough samples, you will get proper mean value.